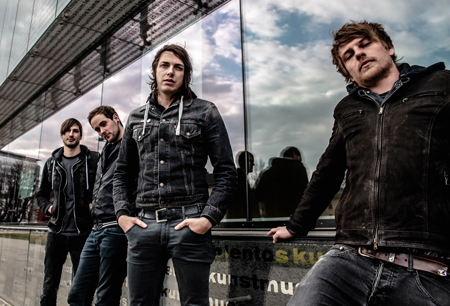 Why is a band performing on Europe‘s biggest festival stage in front of 160.000 people? How did they manage to get interviewed by the Rolling Stone Magazine? And why has a band, which had just released one demo by that time, already played concerts all over the world, all the way to Singapore?

The four Austrians from Vienna have no clue: “Obviously people seem to like us, somehow“ is Dominik Wlazny’s satisfactory explanation.
Nevertheless, it definitely was time for an album. The long-desired debut ‘Gained Noise’ hit the stores in 2014. The album’s title track ‘Gained Noise’ and their second single release reached the top 3 of the German Alternative Charts and stayed there for more than 10 weeks. Also the big music magazines agreed on the high qualities of THE GOGETS’ latest release. Rock Hard hears ‘potential hit candidates’ and Metal Hammer enjoys the band’s dew-fresh sound. The successful release was followed by tours from Italy over Germany and Czech Republic all the way up to Russia and back. On their way THE GOGETS supported Bands like Flogging Molly, Papa Roach, Lagwagon, Ignite, Red Fang or Atlas Losing Grip, only to name a few. THE GOGETS are far away from being an insiders’ tip with their mix of Punk, Rock and Metal.